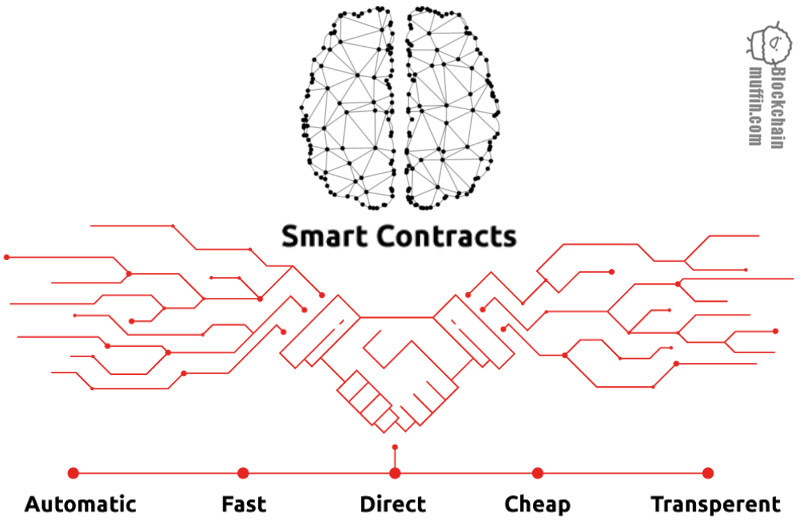 Smart Contract is another step in the progress that is made in blockchain technology, consisting in the transition from the protocol of financial transactions to a universal tool that will automatically implement contract terms in an automated manner, minimizing the risk of error and manipulation

What are Smart Contracts? Smart contracts are nothing more than a type of digital contract. Thanks to smart contracts, we are able to cash in virtually any service, thing or property on a clear rules without intermediaries. These contracts will always be saved in the blockchain.

The best way to describe smart contracts is to compare them to a vending machine. Usually, if you want to sell something e.g property, you must go to a lawyer or notary so that he can give you an appropriate document, then with additional cost you are able to sell your property. In the case of "smart contracts" You simply must put money into the machine and as a result, without any intermediaries, we become the owner of the desired item. What's more, smart contracts not only define the rules and penalties associated with the contract, but also are able to automatically enforce them.

Here is the code for a basic smart contract which was written on the Ethereum blockchain. Smart contracts can be encoded on any blockchain, but Ethereum is mostly used since it gives the greatest processing capability. More about Ethereum Smart Contracts here

Each of us probably voted and probably knows how problematic is the organization of such a venture. The cure for all these matters turns out to be smart contracts that can ensure the security and credibility of the votes. Another advantage is the time of counting votes, which would be significantly shortened.

Already, new cars are able to monitor and record the current state of the vehicle, information of road conditions, but also other valuable signals that could later be used by insurance companies that would charge rates depending on where and in what conditions customers run their vehicles.

Records regarding the state of our health can be saved and stored in a blockchain, secured with a private key, access to which can only be given to specific persons. Records about operations can be stored on blockchain and automatically sent to insurers as evidence. The blockchain itself can be used for general management of the health service, e.g. for supervision in the administration of medicines, compliance with rules, for storing test results and for managing resources.


In 2015, the Depository Trust & Clearing Corp. (DTCC) used a blockchain ledger to process more than $1.5 quadrillion worth of securities, representing 345 million transactions.


Of course, smart contracts in their current form are far from ideal and they are still missing a lot to get into widespread use. However, it should be remembered that we are still at an early stage of development of these technologies.